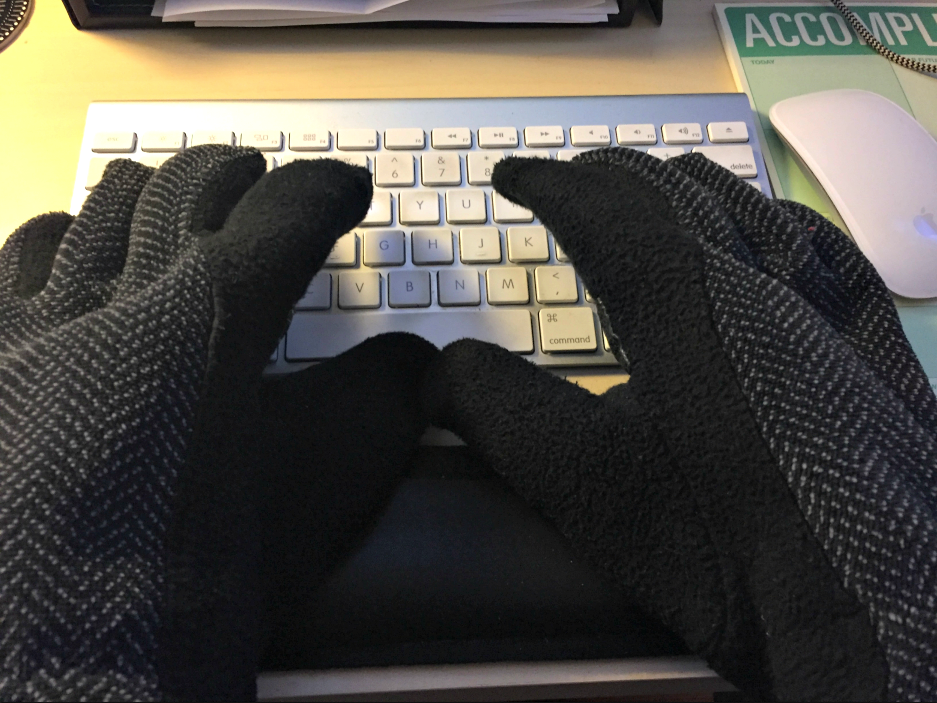 It was cold yesterday. So cold that I had on two sweaters, with another layer underneath, plus a tossle cap (For those of you who don’t know, that’s Western PA lingo for a winter hat.) I also had on long underwear beneath my pants and a pair of super-thick wool socks. Yet despite all that, I was still freezing.

And I didn’t even go outside.

My house is cold. Bone-chillingly so. Built in the late 1800s, it’s just brick and plaster. And no insulation. If for some reason you decided to put your tongue on the wall, it would freeze to it (just like poor Flick and the flagpole). Even if you pump up the furnace to 70+, the only room that ever gets slightly warm is the dining room, because somewhere along the way it was renovated with drywall backed by insulation. Take a few steps over into the den or the kitchen, and it feels like you’re in the frozen foods aisle at the grocery store.

Upstairs is even worse, which makes no sense, since, according to what I learned way back in grade school, heat rises. Apparently in my house the laws of physics do not apply. Up on the second floor, where all the bedrooms are, it’s easily 15-20 degrees colder. When I go upstairs to go to sleep at night, I can actually see my breath. Getting out of bed in the morning is like taking the polar plunge.

The warmest room in the house is actually the first-floor bathroom, since it’s small and one of the few rooms with drywall and insulation. Collectively, as a family, between the months of November and April, we probably spend more time in there then anywhere else. Compared to the rest of the house, it’s like a sauna. Heck, just this morning before school the kids were in there playing because it was so cozy. If only we could fit the sofa and TV in there.

My father-in-law always tells me “the heat’s in the tools.” Thanks, but that’s not much help to a writer like me who can barely tell the difference between a Phillips and a flathead. And believe me, there’s only so many screws you can tighten.

A couple years back we got desperate and paid an exorbitant amount of money to have insulation pumped into the tiny space between our home’s two layers of brick. Everything seemed to be going fine until the pressure blew out a large hole in the plaster and foam insulation began pouring into our living room. After that the insulation guy said he wouldn’t recommend continuing, even though we’d only finished one side of the house, which is basically like wearing half a coat. It would’ve been just as effective to pump shredded up dollar bills into the walls (which is pretty much what we did).

People sure were a lot tougher back in the old days when they built my house. At least we have a highly inefficient gas furnace to just barely keep us from freezing to death. Back then all they had were the four fireplaces — two downstairs and two up — which couldn’t have made that much of a difference. ‘Course, back then people weren’t expected to live much past 40, so at least they only had to endure about half as many winters as we do.

During these frigid winter days, I spend a lot of my time standing as close as possible to the gas fireplace in the living room. Any closer and I’d be a log. The problem is, most of the heat it pumps out gets lost in the high ceilings of our Victorian-era home. To remedy this problem, I’ve been thinking about lowering the ceilings from 10 feet down to around three and a half. Sure, it may be a little awkward crawling around on our knees all day, but at least we’ll be warm.

Sometimes I feel a little guilty complaining about how cold my house is when there are so many homeless people living in cardboard boxes on the street. Then again, I hear cardboard is a pretty good insulator.

Anyone know how to attach cardboard to 130-year-old plaster? ~