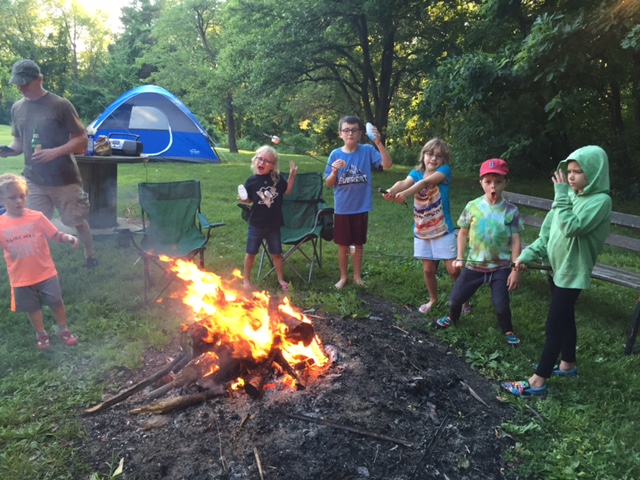 I’d been itching to camping, especially after our two-week, epic family road-trip. After all that time cramped together in the Hyundai and hotel rooms, I was really longing for some quiet time out in the woods.

So when my good friend Brian invited me up to his spacious, secluded property for an impromptu campout, I jumped at the chance. I figured I’d bring my kids and my nephew along too, so they could play with Brian’s four kids and, hopefully, leave us dads alone.

Now if you’ve been doing the math in your head, that makes two dads and seven kids. Why did I ever think this was going to be relaxing?

There are only two things I don’t like about camping: setting up and tearing down. So as we pulled into my friend’s driveway, all I wanted to do was get set up as soon as possible so that I could grab a beer and relax by the fire. As I began to unpack, my kids were already climbing their way up a large pine tree. Brian’s offspring followed close behind. Meanwhile I made trips back and forth from my car to our campsite, lugging the tent, sleeping mats, sleeping bags, blankets, pillows, The Animal’s “Blankie”, and Boogieface’s “Bunny”, “Teddy”, and “Raggies.” Oh, and last but certainly not least, Daddy’s beer cooler.

Just as I was heading back to my car for another load, I heard the first of what would be many cries for help that night. Apparently Brian’s four-year-old had gotten stuck up in the pine tree. Since Brian was out on a beer run, I squeezed my way into the sappy branches and managed to get him out unharmed. Then it was back to setting up camp.

After locating one of the only flat spaces on the property, I began to set up my Hilary next to Brian’s Taj Majal of a tent.

“We’re all going to sleep in that?” said my daughter, as I fished the last tent support through the narrow slot. “How are we gonna fit? It’s so small.”

“We all fit in it just fine last year,” I replied. And we did. Yet, as I started laying out the sleeping bags inside, it did seem strangely smaller than I remembered. That’s when I realized I had grabbed the wrong tent from my garage. The other tent — the bigger one — was still at home. Wonderful.

By this point I was sweating like a dog in the early evening sun, and there was no way I was going to undo all that work. Instead I told Brian I’d be right back, and then I drove home to get the one-person tent my friend Diane let me borrow. Once again the beer and relaxation would have to wait.

Finally about 45 minutes later, I was back, the tents were all set up, and I was happily sitting by the fire, an ice-cold brew in hand. The sun was setting. The kids were off running around somewhere. It was all so peaceful and relaxing.

Then Brian brought out the s’mores.

You may be surprised to hear this, but it’s a little hard to relax when you’ve got seven kids running around you carrying flaming sticks. It’s a bit unnerving. My kids and my nephew are all old enough that they can pretty much handle making a s’more without burning themselves too badly. But two of Brian’s are still too young to be trusted with red-hot metal pokers and molten marshmallows. So while he did his best to keep up with the s’mores demand, I kept my eyes on the other kids who were having a blast throwing sticks, logs, and empty plastic snack bags and Little Hugs into the fire.

When you have one kid saying “Daddy! Daddy! Daddy!” every five minutes, it can get a little annoying, especially when you’re trying to converse with an old friend around the fire. Now multiply that by four. That’s what Brian’s kids were doing, and it was driving him crazy.

“Hey, you’re the one who decided to have four,” I told him, taking a swig of beer.

When you’re camping, it’s just common sense to keep the tent flap closed so that no bugs get inside. Of course, telling a bunch of kids to stay out of a tent is like handing them an ice cream cone and telling them not to lick it. So of course they went inside the tents. Then they’d come out. Then they’d go back in again…and again…and again. And again and again Brian would have to shout, “Keep the tent flap closed! You’re letting all the mosquitos in!”

Of course only minutes later his youngest daughter was calling to him: “Daddy! Daddy! There’s a big bug flying around in the tent!”

“Of course there is!” replied Brian. “Didn’t I tell you to keep it shut!? Well it’s in there now, too bad!”

Eventually Brian could take no more, and so he went and got his DVD player and a movie to try to keep his kids busy. Seeing it was around 10 o’clock, I decided it was time to get mine to bed too so that the actual relaxing could finally begin. Of course they all whined and declared that they “weren’t tired”. But I didn’t care. One way or another they were staying in that tent! In a final act of desperation, I gave The Animal my phone so he could play Angry Birds. Then I went back to the fire to hopefully enjoy some quiet time.

About 15 minutes later I noticed a shadowy figure moving up the hill away from the tents and toward the house. A short time later the dark apparition reemerged from the house and approached the fire. Much to my chagrin it wasn’t a juvenile sasquatch but rather my son who then pulled me aside to inform me he had wet himself. Everywhere you looked, as far as the eye could see, was basically one big toilet, and yet he had chosen this place and this moment to pee his pants for the first time ever. Luckily I had packed an extra pair of PJs for him, but no underwear.

“No underwear?!” he exclaimed. “But Daddy, I can’t wear pajamas without underwear!”

Finally all the kids were inside the tents and, hopefully, drifting off to sleep. And then the fireworks started. It being the Fourth of July weekend, all around people were starting the celebration early by detonating their personal backyard arsenals. The next thing we heard — you guessed it — “DADDY!!!”

We finally did get to a point when all the kids were sound asleep and it was just us, our beers, and the fire. Unfortunately by that time it was pretty late and I needed to get some sleep. After all, I had a lot of packing up to do in the morning. ~