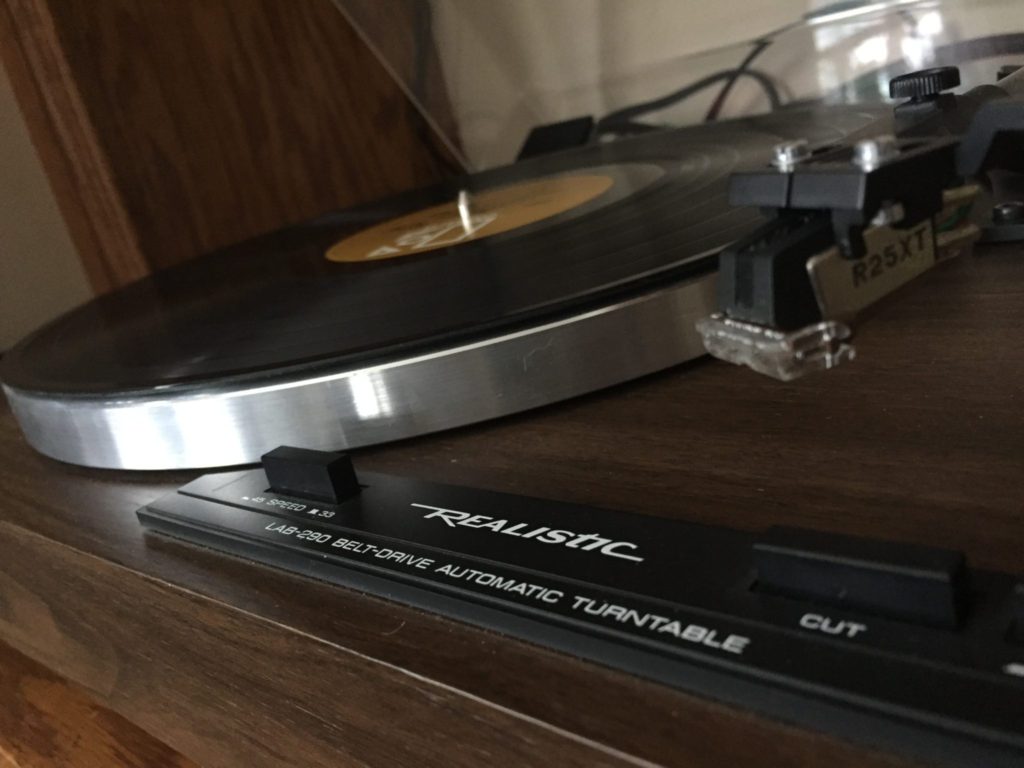 I have come here today to make a declaration: I’m officially off typewriters. (Pretty sure I’m the first person in the history of words to pen that phrase.)

Don’t get me wrong, I still love typewriters and always will. But, to my wife’s delight, I’m officially done with hoarding them in my home. I’m actually selling off my collection one by one. Sure, I’ll hang on to five, maybe 10 of my favorites, but gone are the days when I had thirty-some machines sprinkled around every corner of my house. I’m over that particular infatuation.

Besides, I need that extra space now—for my albums!

I’m not really sure how this latest obsession started. But I think, just as technology overload pushed me into embracing the untechnology of typewriters, the cold and complex world of digital music ended up leading me back to the simpler, more tangible world of vinyl records.

Now, before you start calling me a hipster, I actually grew up with records. I’m not into it for the novelty. Besides,  I can’t stand skinny jeans, I’ve never been to Whole Foods, and I don’t own a single pair of suspenders.

A couple years back my folks bought us a new, retro-style Crosley record player. Soon after I found myself rummaging through antique stores, for once not for typewriters, but for records. It wasn’t long before I had amassed a nice collection of albums, mostly of the “Big Band” variety. Then my father-in-law dug out some of his dusty old albums and gave them to me. And as more and more people learned of my new hobby, they too started giving me their old LPs. Feeding the addiction, so to speak.

At the time I had no idea that you could actually buy brand-new records. That is, until one of my favorite bands — Radiohead — began offering its new releases in vinyl. Now I could get depressed in a cool, retro way!

Eventually I started reading up online about vinyl collecting and learned there’s a worldwide movement back to this once believed to be “dead” technology. I joined Facebook groups and bookmarked websites dedicated to vinyl collecting. Just recently I decided to upgrade my Crosley to something a little more professional. I considered purchasing a brand-new turntable, but then realized that would be sacrilegious. So instead I searched Craigslist and found a beautiful vintage model from the early 1980s (a Realistic LAB-290). I also purchased a nice set of bookshelf speakers so I could get the most out of my new toy.

Now every chance I get I’m out on the hunt for more albums to add to my growing collection. Right now in fact, as I write this very post, I’m waiting for my favorite, top-secret used record store to open! (Just kidding. I’ll tell you where it is if you ask.)

Now, those of you who truly know me know this isn’t my first obsession.

Back when I was a kid, it was sports cards. In fact, I still have several shoeboxes in the basement full of baseball and football cards from the 1980s and earlier.

Later on in my mid-20s, during a period of my life when I was obviously trying to fill a deep dark void caused by a succession of nightmarishly boring and unfulfilling jobs, I got caught up in the nostalgia brought about by the release of the Star Wars prequel movies’ and began collecting vintage toys and figures. I consider these my Dork Years.

Thankfully the birth of my first child shocked me back into sanity, and instead of blowing my paychecks on eBay auctions for vintage X-Wing Fighters and Millennium Falcons, I began saving my hard-earned money for more important things, like diapers.

It was right around this time that my wife bought me an old Underwood No. 5 typewriter as a birthday gift, and the seeds of my next great obsession were sown. Over the next decade I gathered just about every typewriter I could find until my collection neared 40. Hey, I never claimed to be the coolest guy on the block.

Oh, and somewhere in there I became obsessed with everything Bigfoot, too. (I guess my Dork Years never really ended.)

And now I’m hooked on vinyl.

But, hey, if one is going to have an obsession, I must say this is one of the better ones to have. Unlike those bulky typewriters or vintage spaceships, records hardly take up any room at all. And, depending where you look, they can be had for as little as $1 apiece (or free, if a friend is kind enough to give their old ones to you).

Best of all, unlike my previous compulsions, I’m not just collecting stuff for the sake of having more stuff. I’m collecting music. And few things are as important to me as music.

5 Responses to "For the Record"