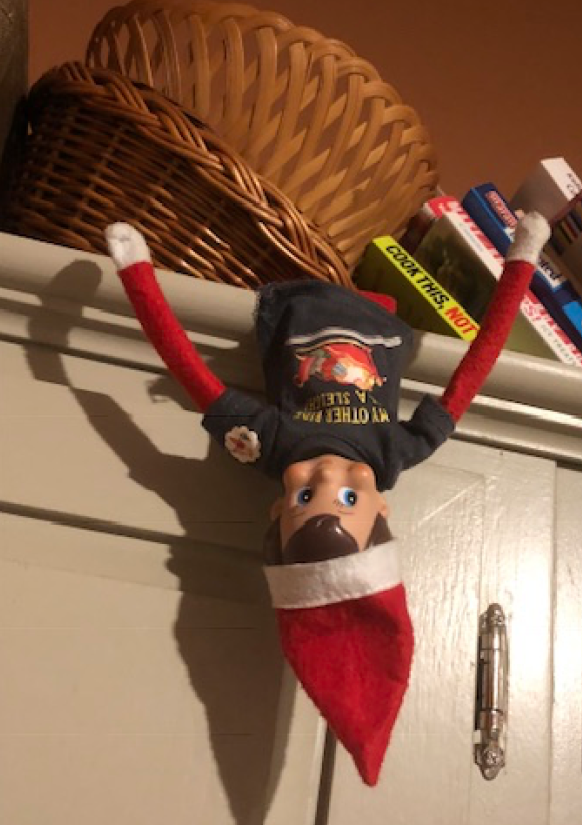 When your kids are still pretty young, it’s easy to convince them of crazy things. Things like fairies exist. Or that an enormous bunny sneaks into their house overnight and leaves them plastic eggs filled with candy. Or that an overly jolly and slightly rotund old man with a long white beard can somehow squeeze down the way-too-narrow chimney with a large sack of toys.

But eventually there comes a time when the naiveté of childhood begins to wane and it’s not so easy to fool them anymore. They no longer accept things at face value. They ponder. They ask questions. Basically, they make it difficult for you, the parent, to keep up these cute little ruses.

We’re at that point right now in my family. Well, at least with Boogieface, who just turned 11 a few months ago, and who has most certainly been discussing things with her friends at school.

Heck, I can still remember being her age and sitting around the lunch table having a serious debate with my buddies about whether or not Santa was real. Some of the more “mature” boys (i.e., the ones who were already sprouting facial hair and using deodorant) were adamant that old St. Nick was but a farce. I, on the other hand (still some years away from needing to shave or worry about offending body odor) wasn’t so certain. Oh, sure, the flying reindeer thing was ridiculous. But surely Santa existed. And as for how he got down the chimney, he used magic of course. Duh!

My daughter has always been a solid believer. It wasn’t long ago that she was still responding to her “pet fairy,” who lives in a little garden in the corner of our dining room and who periodically leaves her little messages to read. Recently though, I’ve noticed that my…um, I mean the fairy’s notes have been left unanswered. How sad.

Now that the holidays are upon us, I’ve begun to notice that Boogs seems a little suspicious for the first time. Take the other day, for example, when she was reading The Elf on the Shelf so that our personal elf, Snowflake, would magically return from his home, far away at the North Pole. (Actually, for most of the year he “lives” downstairs in the basement, shoved way back in the corner of storage cabinet.)

“Wait a second,” she said suspiciously. “Who are these people who wrote this book? I don’t get it. I mean, what did elves do before the book came out?”

“That’s a good question,” I replied, before immediately changing the subject and hoping that she’d just forget the whole thing.

Next both she and The Animal wanted to know why their elf is so boring and just hides around the house, unlike those of their friends, which do “awesome things” like set up zip lines from the Christmas tree or have marshmallow fights with Star Wars figures.

“Because,” I replied, “other parents have way too much free time on their hands and have nothing better to do but stay up ’til all hours of the night setting up elaborate scenes with their damn elf!”

Well, at least that’s what I wanted to say. What I actually said was something on the lines of, “Um…well…uh…I’m not sure?” This led them both to go and pen letters to Snowflake, requesting that he do “cool and awesome stuff” from now on.

Then Boogs dug out our old digital video camera and began setting it up so that she could catch the elf in the act later that night. “You can’t do that!” I told her. She wanted to know why. “Well…um, because…because that camera’s old and the battery only lasts a few minutes. You’ll never get any useful footage.”

The other day we told them both to make out their wish lists for Santa so that Snowflake could take them back to Santa at the North Pole (and so that we’d know exactly what they wanted). The Animal left his list right in the middle of the dining room table. Boogieface, however, hid hers to see if the elf would take care of it on his own. After scouring every inch of the house for the hidden list, it took some slick thinking by my wife to convince our daughter to relinquish said list, saying something about how they had to be left out in plain sight in order for Snowflake to be able to find them.

Who knew that blatant and constant lying would be such an integral and necessary part of parenting?

So, yeah, it won’t be long now until we have to fess up to Boogieface and admit that we’ve been deceiving her all these years. I just hope it won’t break her heart. I know it won’t be easy on mine.

That said, it will be nice finally getting some credit for all the money we spend on them for Christmas, not to mention not having to worry about that you-know-what elf anymore. Elf on the Shelf? Ha. More like Elf in the Garbage. ~