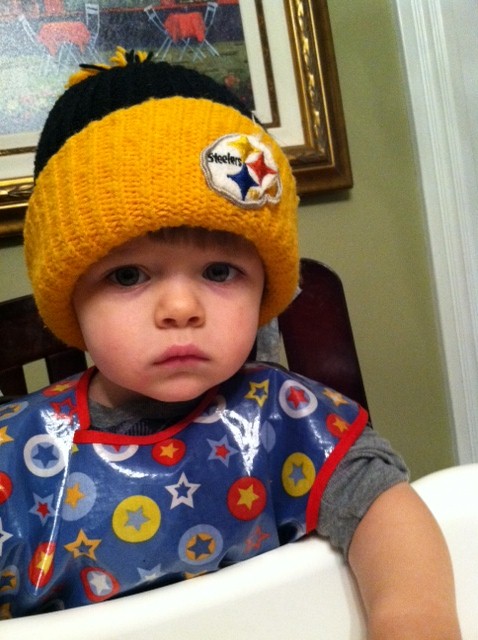 “More thoy thauce, peas!” yells my son, the salty brown liquid running down his chin and dripping onto his plastic bib. Just moments before, he put the tiny dish of soy sauce up to his mouth and slurped it down as if it was leftover milk in a bowl of cereal. We had given it to him to use as dip for his stew – yes, stew – which he was refusing to eat. A bizarre combination of food and condiment, for sure, but it worked. And to us, that’s all that matters.

I used to look forward to dinnertime. It was a time to relax after a long day at work; a time to converse with my wife over a delicious meal. We’d eat slowly, savoring every bite as we talked about our day. Afterward, we’d enjoy a hot cup of coffee and maybe even some dessert.

Those days are long gone.

Now, from the moment I secure my son in his high chair and connect the Velcro ends of his bib strap, I can feel the anxiety rising within my chest. That’s because I know what’s coming. And it’s not going to be pretty.

Here’s a typical dinnertime for us:

After I set the table and get the kids in their seats, my wife brings out the meal, which she has so kindly prepared for us after putting in a long day of work herself. My ever-ravenous son squeals with excitement, while my daughter looks on, warily. Then my wife places the meal on the table, at which point my son’s squeals intensify. My daughter, on the other hand, inevitably falls back into her chair with disappointment, since the meal isn’t chocolate cake or ice cream. I blow on my son’s portion to cool it off, which makes me light-headed and nauseous. Then, when I place his food on his tray, his squealing stops as his appetite suddenly disappears. “NO LIKE IT!” he says, as he shoves the bowl precariously close to the edge. Realizing that the fuse has been lit, my wife and I quickly say grace and begin to fill our plates. I inhale my meal in a matter of seconds, fully expecting my son’s sippy cup to come flying at my temple at any moment. Between bites my wife wrangles with my daughter over exactly how much she has to eat before she can be excused. Ten minutes later I’m already in the kitchen cleaning up, i.e., escaping, as my wailing son throws his milk and thrashes around in his high chair. Meanwhile my wife is still trapped in a heated debate with a four-year-old.

So when we discovered by accident one day that giving my son soy sauce would entice him to eat, and, in turn, enable us to do the same, we didn’t ask questions. Soy sauce on pizza? Sure! For your spaghetti? Why not!

As for my daughter, at first she refuses to eat at all. Then, when she realizes her protest is cutting into her play time, she begins to bargain with us. “I know,” she says, “how about I eat three more bites, then I can be done?” We then submit a counter offer of five. “THREE!” she shoots back, sticking to her guns. This goes on and on until finally we give in, exhausted and browbeaten by a preschooler.

The Number of Bites method is just one of my daughter’s ways of getting out of eating. Sometimes she’s struck with a sudden stomachache, which inexplicably disappears once we mention we have ice cream for dessert. Other times she claims she’s “just not hungry,” even though she hasn’t eaten in three days. Most of the time, though, she just whines and cries until my wife and I, weary and desperate for a peaceful meal, admit defeat.

Of course, when it’s time to put her to bed, my daughter’s appetite miraculously reappears and she begs us for crackers or a bowl of cereal—anything to postpone going to sleep.

Somewhere up there God’s have a good laugh at our expense.

8 Responses to "The Battle of Dinnertime"