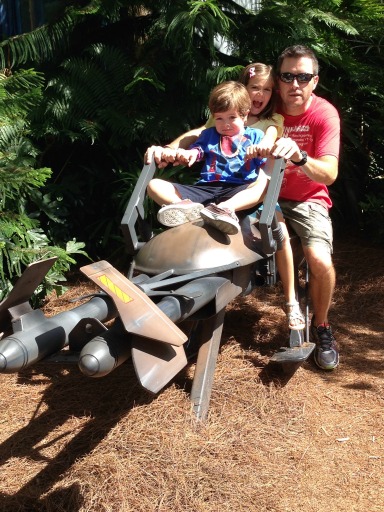 As soon as I spotted the old Remington typewriter in the store window along Hollywood Studios’ main drag, I knew it was going to be a good day. Obviously this was my kind of amusement park.

Once again we got there right when it opened, and, per my wife’s research, we headed straight for the Jedi Training Academy. After a short wait, both Boogieface and The Animal were signed up for a training session later on that day. To say I was jealous would be a bit of an understatement. But, alas, they didn’t train adults (Yes, I asked.)

On a side note, while we were waiting in line, a Russian woman turned to us and asked: “Is dis dee line for dee Yeti Training?” 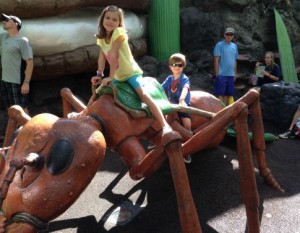 From there we rode Toy Story Midway Mania and, my personal favorite, Star Tours, before letting the kids explore the “Honey, I Shrunk the Kids” movie set adventure playground, which featured giant insects and 30-foot-tall blades of grass. Fortunately they didn’t find any gigantic dog poo.

We also caught the “For the First Time in Forever: A Frozen Sing-Along Celebration” show. To be honest, I wasn’t really looking forward to this one, since it had literally taken me months to extricate the “Let It Go” earworm from my brain. But my kids love the movie, and I figured it would be cute to hear them singing along at the top of their lungs.

Unfortunately the only thing I heard was the woman beside me singing at the top of her lungs. She must have thought it was a Broadway tryout or something, the way she was carrying on. I tried to block her out by plugging my left ear and turning completely away from her. But it was no use. When the show was finally over, I really wanted to give her a piece of my mind, but then I just decided to let it go. (Sorry.)

Instead we headed off to our next FastPass+ at the Indiana Jones Epic Stunt Spectacular, which I was really…I mean, my kids were really excited for.

That afternoon it was around 90 degrees and humid — Is it ever comfortable in Florida? — so after the show we let the kids nap in the stroller for a bit while I enjoyed a couple ice-cold draft beers. Again, Disney really knows their stuff.

Finally it was time for the kids to learn the ways of the Jedi. After receiving their official robes, they were led over to a Star Wars set where a real Jedi master (I think his name was Bob) showed them the ways of The Force along with the proper way to handle a light saber (otherwise known to my son as a “life saver”).

Suddenly Darth Vader appeared, flanked by two Imperial Stormtroopers! I watched in amazement – and with aching envy – as both of my kids took a turn testing their newfound Jedi skills on Lord Vader. Fortunately they were victorious. Otherwise it might have put a damper on the rest of our vacation.

We closed out the day with the Fantasmic! fireworks show and then caught the bus back to the hotel, where I was delighted to find the box of wine I ordered waiting for me. As the kids and Cass hit the sack, I let the Merlot medicine numb the pain in my knees and hips while I took in a little Monday Night Football.

Smile Count… (Oh, heck with it. By this time I’d lost count anyway.)

Next up… It’s Magic time!

3 Responses to "My Disney Adventure: Part II – Hooray for Hollywood!"