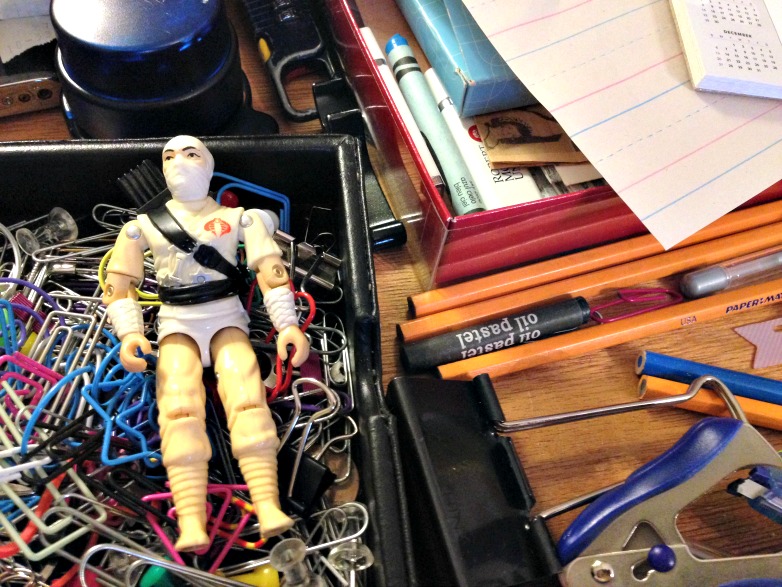 I’d been hiding it inside my desk drawer where I knew it would be safe and where, every now and again, I could catch a glimpse of it and recall those oh-so-wonderful days before things like mortgages, electric bills, and chronic back pain.

“Um…well, that’s Storm Shadow,” I said. “The dreaded white ninja and personal bodyguard of Cobra Commander himself! He was one of my favorite toys when I was a little boy.” (Still is.)

You see, I am quite familiar with my son’s work. Case in point: I’d already watched him take my once-pristine Matchbox car collection and transform it into a die cast junkyard. Whoever came up with the phrase “with kid gloves” definitely didn’t have my son in mind.

Eventually, though, I came to my senses and decided to let him have it. I’m a grown man, for cryin’ out loud. I don’t need to hang onto some stupid action figure for nostalgia’s sake. (“Toy Story 2” was on later that day and it got to me.)

What was the big deal, anyway? After all, Storm Shadow is a toy, and toys are meant to be played with. What’s the worst that could happen?

A few days later, my son came up to me holding Storm Shadow’s torso in one hand and his legs in the other.

“Yes, I see that,” I replied, as he handed me the remains of my cherished toy. It had taken The Animal just three days to destroy something that for more than 30 years I had kept in near-perfect condition. Knowing his record, I shouldn’t have been surprised.

I was devastated. But I wasn’t about to just toss him in the garbage. (Storm Shadow, that is; not my son.) Upon closer examination of the bisected figurine, I realized that the broken rubber band that had been holding him together was exactly the same size as those little multi-colored rubber bands my daughter uses to put her hair up, and which I’m always sucking up with the vacuum. Although I’d never attempted surgery on an action figure before (or on anything else, for that matter), I had to at least try to save my old friend.

So I washed up, grabbed my philips-head screwdriver, and went to work.

It was a complicated procedure and one that required the complete disassembly of the once proud ninja warrior. It took about a half hour to thread the tiny rubber band into place and then screw everything back together. When I was finished, my beloved Storm Shadow was as good as new! Or at least as good as a 30-year-old action figure can be.

It was my proudest moment, next to the time I managed to change out the innards of my commode without flooding the house.

Of course, now that Storm Shadow was whole again, there was no way in the world I was going to share the good news with The Animal. I mean, I know toys are supposed to be played with and everything, but I’m also pretty sure they appreciate not being torn in half by rambunctious preschoolers with a history of toy abuse.

Believe you me, Storm Shadow is much happier spending the rest of his life safely inside my desk drawer.

Trust me. I know him better than anyone. ~