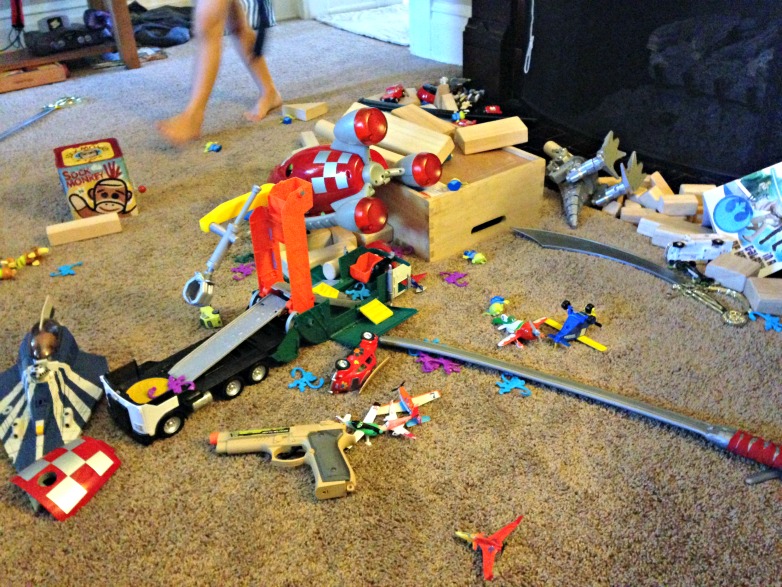 That’s it. It’s over. I surrender.

I can no longer keep up with the ever-growing, all-consuming mess of toys that has taken over my once beautiful home and infiltrated every nook and cranny therein. It was a valiant fight, and one that has brought many a gray hair to my head. But sometimes you just have to know when to wave the white flag.

The battle began years ago, as soon as my kids were old enough to crawl. They’d make a mess, usually by emptying out a cupboard or toppling something over, and I’d be right there, following close behind to clean it up. I like things neat and tidy, you see. it just feels good having everything in its place. And, whenever possible, in right angles. And preferably square with the walls.

But as my kids got bigger, unfortunately so did the messes. Right as I’d pick up the last LEGO, my son would dump out his Matchbox cars all over the floor. The minute I placed the last of my daughter’s stuffed animals back on her bed — in order according to size and height, of course — she’d set up a baby doll tea party right in the middle of the bathroom floor. Lovely.

For years I tried to keep my head above water and manage the mess by disposing of any toy that hadn’t been played with over a reasonable period of time—say, six months or so. Whenever the kids weren’t looking, I’d fill a cardboard box with these neglected toys and sneak it down to the darkest, scariest room in the basement, hoping they’d never realize their toys were missing. Then, when spring came around, I’d mix the hijacked toys in with all the other junk and hope that someone would take them away before my kids became wise of the situation. Whatever was left at the end of the day would then be carted off to Goodwill, where it could go forth and clutter someone else’s life.

And, you know what? It worked.

But then a birthday would come along, or Christmas, and despite our desperate pleas to the parents and in-laws for mercy, a whole new mountain of toys would come flooding through the door to take up residence in the living room and, in turn, send my anxiety through the roof.

In a last-ditch effort for a somewhat-clean home, last year my wife and I decided to move both kids into one bedroom and turn my daughter’s old room into a playroom where they could keep all of their toys in one place. All six million of them. (It’s a big room.)

But of course, the playroom just became a staging area for their daily mess attacks, and gradually the toys found their way back down the stairs and into the living room, where they’d take up permanent residence and send me stumbling head over heels in the middle of the night on my way to the bathroom.

And it’s not just the toys that drive me nuts. It’s the pop-up tent cities, made from every blanket and sheet in the house. It’s the craft-tastrophies that turn the dining room table into a construction paper killing field. It’s the dozens of cardboard boxes, sliced up, shaped, and taped into boats and Box Trolls, caves and cars, spaceships and suits of armor.

There’s simply no escaping it!

Therefore, in order to preserve what’s left of my sanity and to survive the remainder of these fully-nested years, I’ve decided to throw in the towel, so to speak, admit defeat, and give in to the mess.

And you know what? It’s actually been quite liberating. Sure, my house looks like a garbage dumpster all the time now. But at least I’m not stressing anymore over the little things, like all the little invisible LEGOs buried deep down within the fibers of my living room carpet, waiting to jab an unsuspecting victim right in that oh-so-tender part of their foot.

So if you happen to stop by my house anytime in…oh, the next decade or so, please, excuse the mess. Because it’s staying where it is, right smack in the middle of the living room floor…and in the foyer…and on the kitchen counter…and on the dining room table…and…

2 Responses to "Surrendering to the Mess"