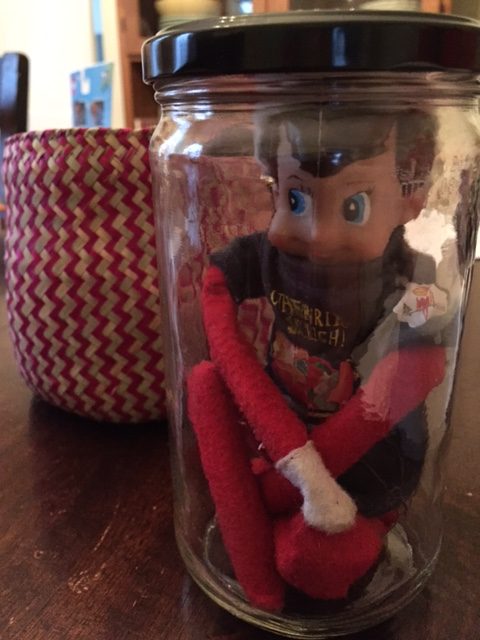 Today was a landmark day in the history of our Elf on the Shelf, i.e., Snowflake. That’s because, for the first time ever, Snowflake left the house.

Oh, sure, he leaves every Christmas Eve (when I gleefully shove him back into the cupboard in the basement) before magically reappearing the day after Thanksgiving (when I go down to the basement and pull his scrawny little elf butt out of the cupboard again).

But today was different. Today Snowflake actually left our house before Christmas, and he did so crammed inside a mason jar so that he could be my daughter’s show-and-tell item.

Here’s how this momentous day in our elf’s, ahem, life came about…

My kids have never actually touched Snowflake, you see. That’s because, for those of you lucky enough not to already know this, you can never, ever, touch your Elf on the Shelf, lest he lose his magical power, and therefore not be able to report back to Santa Claus, which, sadly, is the Elf on the Shelf’s one and only purpose in life. Just to be safe, every night when I have to move the stupid doll to a new location, I always put it somewhere way up high so that my kids — mainly The Animal — won’t be tempted to touch it.

I’m not even sure why I care, really. Having our elf lose its magical powers would surely make my life a whole lot simpler.

Anyway, each Elf on a Shelf’s behavior is different because parents all have different traditions and rules. For example, all my wife and I do is move our elf to a different hiding space every night and leave it at that. Other parents, however — parents with way too much extra time and energy — do all sorts of funny, cute little things with their elf, which they then document out on Pinterest and share with the world via Facebook, so that the rest of us can see just what terrible, lazy parents we really are.

Honestly, I’m perfectly fine with that. I’ve been called a lot worse things than “lazy.”

So my sister-in-law comes up with the bright idea to have her daughter’s elf hide inside a mason jar so that my niece can then bring it around to places with her, such as to school. Of course my daughter sees this and wonders why we can’t do the same thing with Snowflake. Thanks a lot, Sis.

So last night Boogs writes a note to Snowflake and leaves it on the dining room table, where he will be able to see it from where he was at the moment, dangling from the chandelier above:

Said the note, “If you want to go to school with me can you get in the jar? I will not take you out.”

“Sorry if that sounded harsh. Can you breathe in this jar?”

Personally, I didn’t want to set a precedent and allow the elf outside of our house. But my only other option would have been to pen a response from Snowflake, which I really didn’t want to do, considering it would most likely lead to nightly questions, to which yours truly would be required to respond in writing, since the stupid elf has no hands to write with.

So this morning Boogieface comes running down the steps and is thrilled to see her beloved elfin pal tightly sealed inside an air-tight glass jar. Personally, I think it’s a little disturbing. But what do I know?

“I’m pretty sure he can breathe,” she reassures me, “since he used to be a toy and toys don’t really need to breathe anyway.” Oh, I see.

She may be naïve, but she sure is cute!

Before we leave for school, Boogs places the jar containing her elf inside a padded case and then carefully carries him out to the car. The whole time I’m thinking, please oh please don’t let her drop that thing in school. Otherwise I’ll probably be called down to perform some type of Elf on the Shelf emergency rescue mission, which would really throw a wrench in my day.