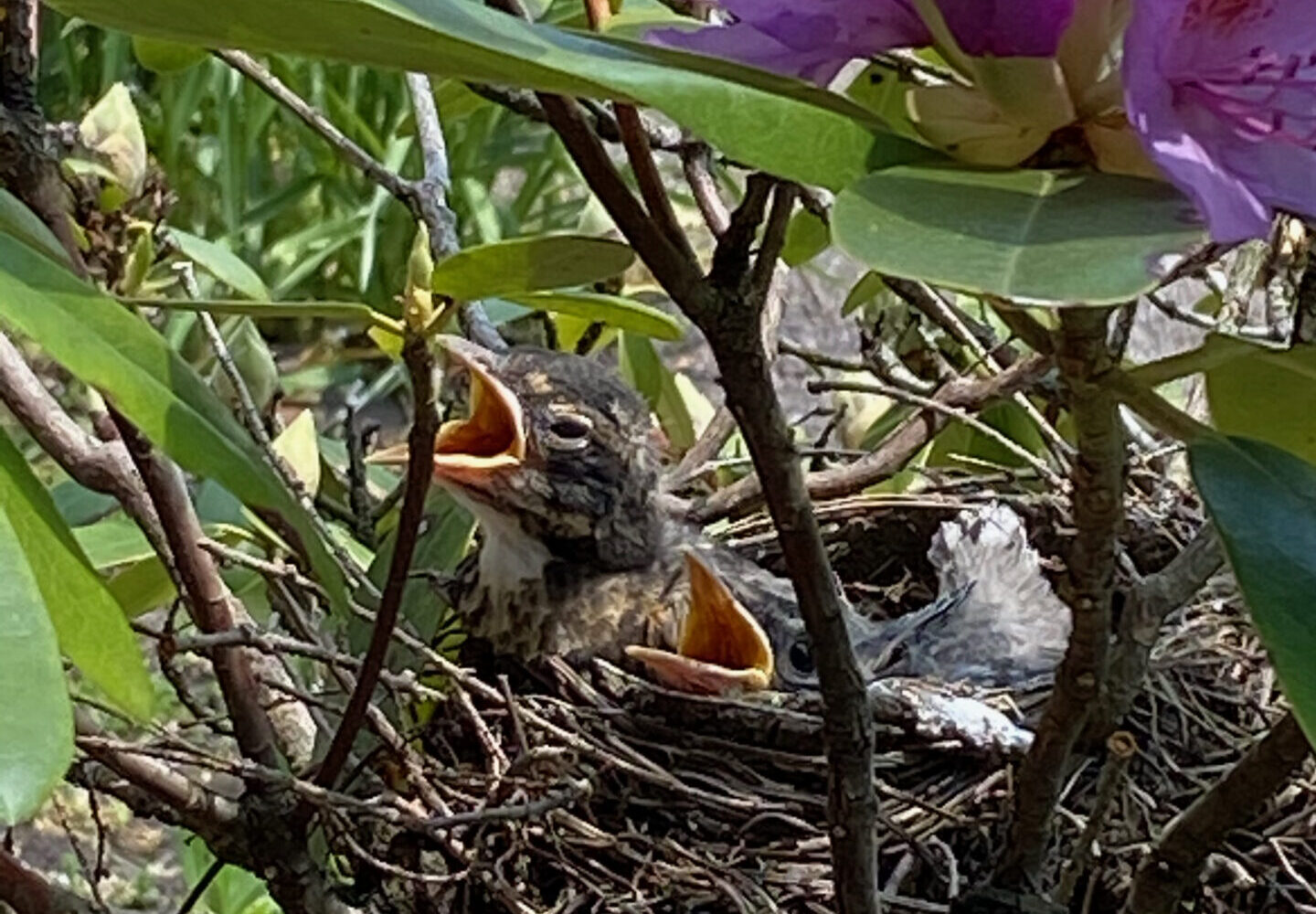 Ever since my kids were very young, I’ve been dreading one day becoming an empty nester. I just figured it would happen years from now.

Oh, the kids are still home. We still have several years before they officially fly the coop. The nest I’m talking about is an actual nest, a robin’s nest, which is just outside my office window in the rhododendron bush. This spring as I sat down to work, I’d watch intently as my little robin family was hard at work.

At first momma robin spent every waking minute of the day building her nest. I’d watch as she’d suddenly appear at the nest with a clump of dirt in her beak. Then, after dropping the dirt into the bottom of the nest, she’d jump inside and squat down, using her weight and feet to press the dirt into a serviceable floor. Next, she’d use her beak to weave a new twig into the nest or repair one that had come loose. Then it was off again to find more dirt.

Soon after, four light-blue eggs appeared. Momma robin then shifted her efforts from working all day to sitting all day—which is something I’m quite familiar with—and it was well-deserved.

At some point two of the eggs went missing, possibly the dastardly work of some bluejay or crow. But the two remaining eggs soon hatched, revealing two pitiful, featherless, but still cute baby robins.

For a few days, Momma continued to keep her babies warm. Beaks began to form, tiny feathers sprouted. Before long the two helpless babies had become ever-hungry toddlers, stretching their long necks out, mouths agape every time Momma or Daddy robin came home with a tasty bug or worm. Watching the robins fly back and forth continually all day long bringing food to their children, I gained a new respect for the species. Heck, I complain if my kids ask me to walk to the kitchen to get them a glass of milk.

Now, this is the disturbing part. Every time one of the parents brought back some food and fed it to one of the babies, the bird would then pause and wait for the baby to stick its tiny birdie butt up into the air. The baby would then poop out a little white sack, which Mamma or Dadda would then quickly snatch in its beak and gobble it down! And they’d do this every single time. Thanks to Google I learned that robins eat their babies’ fecal sacks (yuck) while they’re young because it contains valuable nutrients. Bon appétit!

As the days went on, I could tell that the babies were quickly outgrowing their home and becoming restless. Then one morning I looked out and saw that only one baby robin remained. That evening I watched as the other followed in its sibling’s footsteps and left the nest for good, taking a leap of faith as it took to the air and flew smack dab into my neighbor’s garage. Luckily it was unharmed and skipped away under the watchful eye of Dadda high above on the telephone wire.

The following day I awoke to an empty nest. It was sad. All that hard work Mamma and Dadda robin put in, building the nest, tending to the eggs, the never-ending feedings, the eating of poop, etc., and now there was just an empty home.

As I turn now and look outside at the empty nest still in the bush, I can’t help but think of how I’ll feel one day, in the not-so-distant future, when my own children will leave our home to go off and pursue their life’s journey.

I also think how glad I am I never had to consume their fecal sacks.

2 Responses to "My Empty Nest"