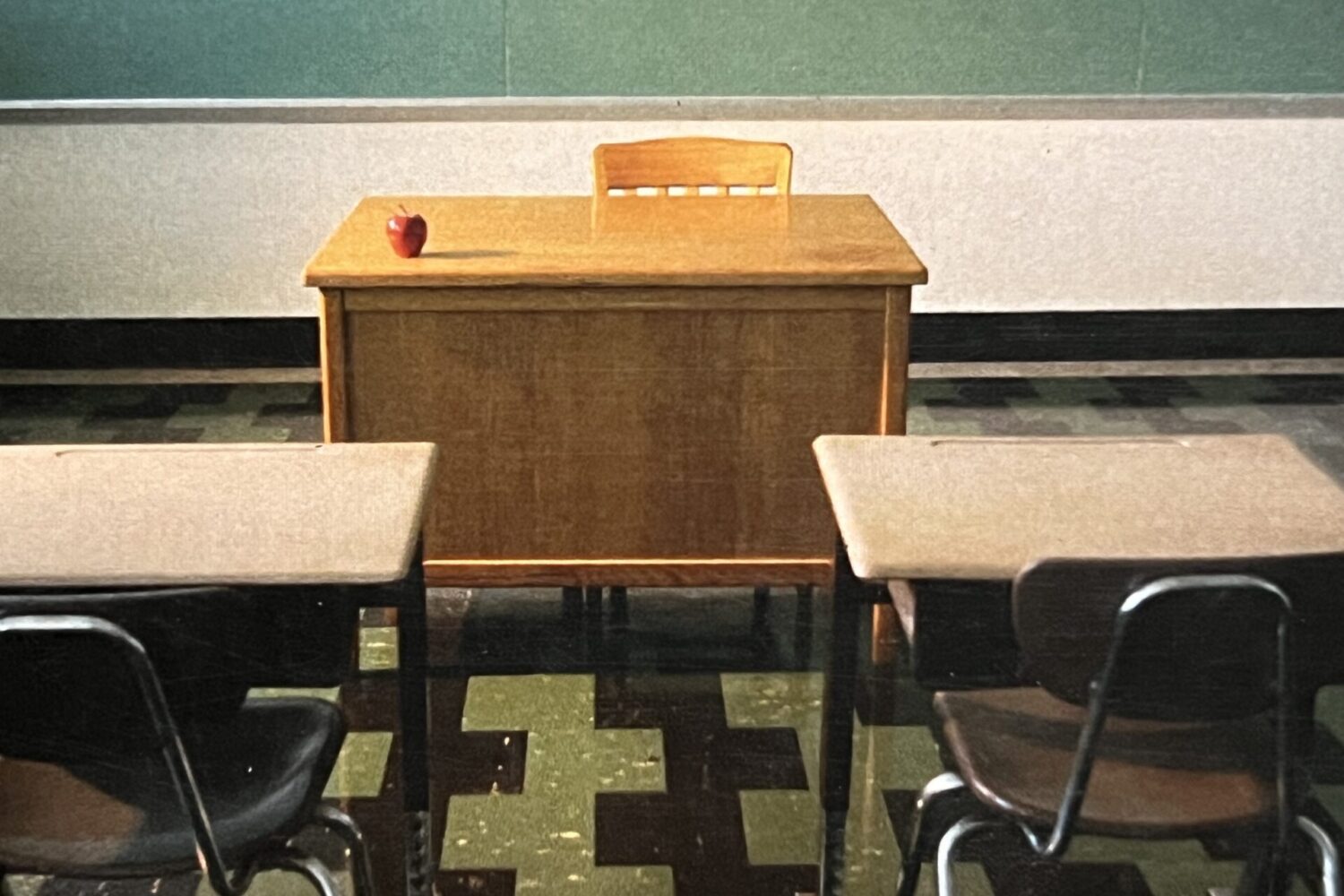 I remember my first day of 1st grade distinctly.

I arrived late because I missed the bus, and Sr. Peggy kindly escorted me to Mrs. Gump’s room. As I walked through the door, twenty-some fresh faces turned to look at me as they stood behind their desks, ready to recite the Pledge of Allegiance. For some kids, this may have been rather intimidating. Not me. I strutted over to my assigned seat, brashly hopped over the chair, landed firmly on the other side, and placed my hand over my heart.

And so began the most vivid and splendid years of my youth—the eight years I spent at Sts. Peter & Paul Catholic School, or as we called it, S.S.P.P.

The previous year I had attended kindergarten in an old, one-room wooden building next to Brighton Township Elementary School. It was there where I first met Beans, a black-haired Italian kid who had around 35 siblings. He and I would later play on the same Little League team, Dave’s Rookies, which, in 1985, posted an incredible 24-0 record—a record, as far as I know, that’s still unmatched today. In the years to come, Beans and I would earn a place in the Pickup Football Hall of Fame as an unstoppable duo—he the strong-armed quarterback, me the lightning-fast receiver.

I don’t recall much about kindergarten, just faded memories of crayons, safety scissors, and the ever-present scent of Elmer’s glue. One of the few things I do remember is sitting in class, chewing on the yellow sleeves of my new faux-leather Pittsburgh Steelers jacket, and spitting out the little bits all over the floor, for no particular reason (proof that my anxiety began early on). When my mother confronted me about the jacket, I didn’t deny it had been bitten to pieces; I just blamed it on my friend J.C. It was an outlandish tale, but, for some reason, Mom bought it. Poor J.C. My mother must have thought he was some kind of freak, sitting there next to me in class, chewing away at my sleeves as I cut out paper snowflakes with my safety scissors.

My eight years at Sts. Peter & Paul defined me. It was then that first fell in love with writing, spending the majority of class time penning nonsensical stories about sea monsters, space battles, and politically incorrect WWII adventures starring me and my friends. I filled several spiral-bound notebooks with these early tales—tangible evidence that I spent most of my school time dreaming rather than paying attention.

My first taste of publication came in the second grade, when Sr. Peggy included my story, Dinosaur Island, in the spring issue of the Sts. Peter & Paul Press. The entire story was just 10 sentences long (and nine chapters), but it was so thrilling to actually see my name in print. Years later Michael Crichton would write a strikingly similar yet much longer tale about an island overrun with dinosaurs. (Coincidence? I think not!)

Doodling was another one of my favorite school-time activities. My friend Jay and I would spend hours drawing elaborate contraptions that we referred to as L.A.S.S. (Land, Air, Sea, and Space) machines. They were like little cities on top of all-terrain wheels, complete with everything from volcanoes and roller coasters, to zoos and airports, to whatever we could imagine. Nothing was off limits. Each time we finished drawing one of these bizarre machines, we’d fold it up, mark it “TOP SECRET,” and then file it away, lest it fall into enemy hands.

Most of my sketches, however, featured less-than-complimentary caricatures of the nuns and other teachers. One time in the 7th grade I drew a picture of my homeroom teacher, Mrs. Frag, as she diagrammed an atom during science class. It was a crude pencil sketch of her standing at the chalkboard, as she pointed out the neutrons and electrons. She was also stark naked. Mrs. Frag was a slight woman, and my artistic interpretation of her made her look like a bag of bones. I also drew a few whiskers jutting out from her chin, just for an added touch. “My electrons are excited!” she said in the picture, as she stood at the chalkboard, pointing at a drawing of an atom. It was my finest work to date. Later on that day, I passed the sketch around to my friends as we sat in Sr. Margaret’s English class. Their laughter only confirmed my skill as a cartoonist.

Flash forward to the end of the school day, my friends and I are waiting patiently in our homeroom for our bus to arrive when one of the 6th-graders comes into the room and says something to Mrs. Frag, who then turns and looks in my direction. “Val,” she says, “Sr. Margaret would like to see you in her classroom.”  At first, I didn’t think anything of it. I was Sr. Margaret’s favorite student, her “little professor,” as she’d often say. She probably just wanted to congratulate me on my latest test score or tell me how much she had enjoyed watching me diagram a sentence earlier that day.

When I approached her desk, however, Sr. Margaret seemed troubled. “Thank you for coming over, Val,” she said. She had that look on her face, the one where her eyebrows angled up menacingly and the multitude of wrinkles on her face became all the more prominent, like an angry Shar Pei.

“Val…did you happen to notice anything in your desk when you were in here for English earlier?”

She persisted. “You didn’t notice a crumpled-up piece of paper or anything?” I was confused. Why would she care about some crumpled—OH NO! THE PICTURE!

Now I remembered… After showing the naked doodle of Mrs. Frag to my friends, I had crumpled it up and stuck it in the desk, fully intending to throw it away after class. But I must have forgotten!

I felt like I’d been shot. I stared at Sr. Margaret’s crinkled face, desperately searching for an alibi. My heart pounded as sweat began to trickle down my back. Surely she’d be able to read the guilt on my face. How would I explain this to my parents? My squeaky clean reputation would be ruined!

“Well,” she said, “did you or didn’t you see anything in your desk?”

They say you’ll go to Hell if you lie to a priest or a nun, but I had no other choice. I’d rather risk eternal damnation than let my parents find out I was spending class time drawing naked pictures of my teachers.

Suddenly, the tension disappeared from Sr. Margaret’s face and her eyebrows returned to their normal position. “Oh…nothing,” she said. “Someone just drew a nasty picture and left it in the desk. But I just knew it couldn’t have been you.”

And so I went back to my homeroom, shaken, but still alive.

A little later on, when I passed Sr. Margaret’s room on the way to my bus, her door was shut and all the 6th-graders were still in there—and so was Sr. Peggy. I couldn’t hear what was going on, but you could see the fear on the students’ faces as the principal conducted her inquisition. I found out later that, since no one would fess-up to the crime, Sr. Peggy had given the entire class a week’s worth of detention. It was certainly unfair that all those kids got in trouble for something I had done.

But in the dog-eat-dog world of childhood, that’s just how it goes sometimes.