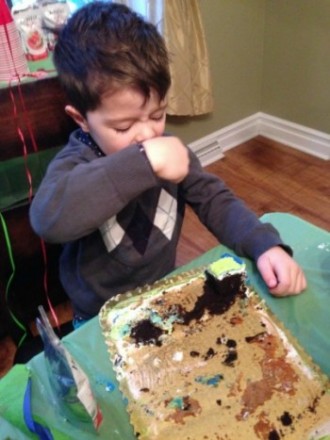 The other day we celebrated my son’s fifth birthday. Boy, time sure does fly by. It’s hard to believe that, just five years ago, I still thought I wanted four kids.

The following is a quick recap of how we celebrated The Animal’s big day:

– Even though we had his official party the day before, we set aside a few more presents for my son to open the morning of his actual birthday. Because heaven knows he needed even more toys just a couple weeks removed from Christmas.

– After we dropped off Boogieface at school, we took The Animal to breakfast so he could have his favorite: the Funky Monkey (think chocolate chips, bananas, fudge sauce, and whipped peanut butter) from Waffles INCaffeinated in Beaver. Or, as my dad calls it, “The Waffle House.” (He also refers to the Brighton Hot Dog Shoppe as “The Pancake House”.)

– Returning home, I actually did a little work (Yay, me!) whilst my son took in six episodes of “Star Wars: The Clone Wars”, his favorite show. And, no, I didn’t force him (no pun intended) to like Star Wars. He decided that all on his own. OK, maybe I nudged him a bit.

– When The Animal was finished binge-watching, we did battle on his brand-new Teenage Ninja Mutant Turtle Battroborg, which, according to the manufacturer’s description, puts “turtle power” in your hands through “precise katana controller movements.” This thing is actually pretty cool. You get to make these Teenage Ninja Mutant Turtle robot thingies fight just by swinging around a sword-handle-shaped remote control. To be honest with you, the whole thing kind of freaks me out. I mean, it can’t until the government has a whole army of life-sized remote-controlled Teenage Ninja Mutant Turtles to do their bidding? Who’s to say they don’t already?

– Next we swung by my daughter’s school to take her out of class early so we could all go bowling. Because, you know, priorities.

– After The Animal and I bowled our way to victory over the girls, we hit the arcade, which is basically Las Vegas for little kids. With all the noise and flashing lights, I felt like I was in the slots room at Caesar’s Palace. And, much like Vegas, we blew through our money limit faster than you can say “rip-off”. Speaking of rip-offs, after earning a bunch of tickets playing games, I actually thought the kids would be able to get something half decent in the arcade store. But apparently all 225 tickets buys you nowadays is a flimsy paddleball, two plastic rings, a balsa wood F-18, a handful of Tootsie Roll Frooties, and a couple monkeys with parachutes you can never repack. Thirty bucks well spent.

– Now that the kids were hungry and all wound up from video games and candy, we thought it would be a good idea to go shopping for school uniform pants for my daughter at Old Navy. I spent the next hour chasing them around the store as they hid in the clothing racks. In hindsight, we probably should have done the mind-numbingly boring activity first.

– Finally we headed home to grab some dinner and spend the rest of the evening assessing the mess and wondering where in the heck we’re going to put all these new toys. At least that’s what I did. The kids just played and had a great time as usual.

It’s good to be young.