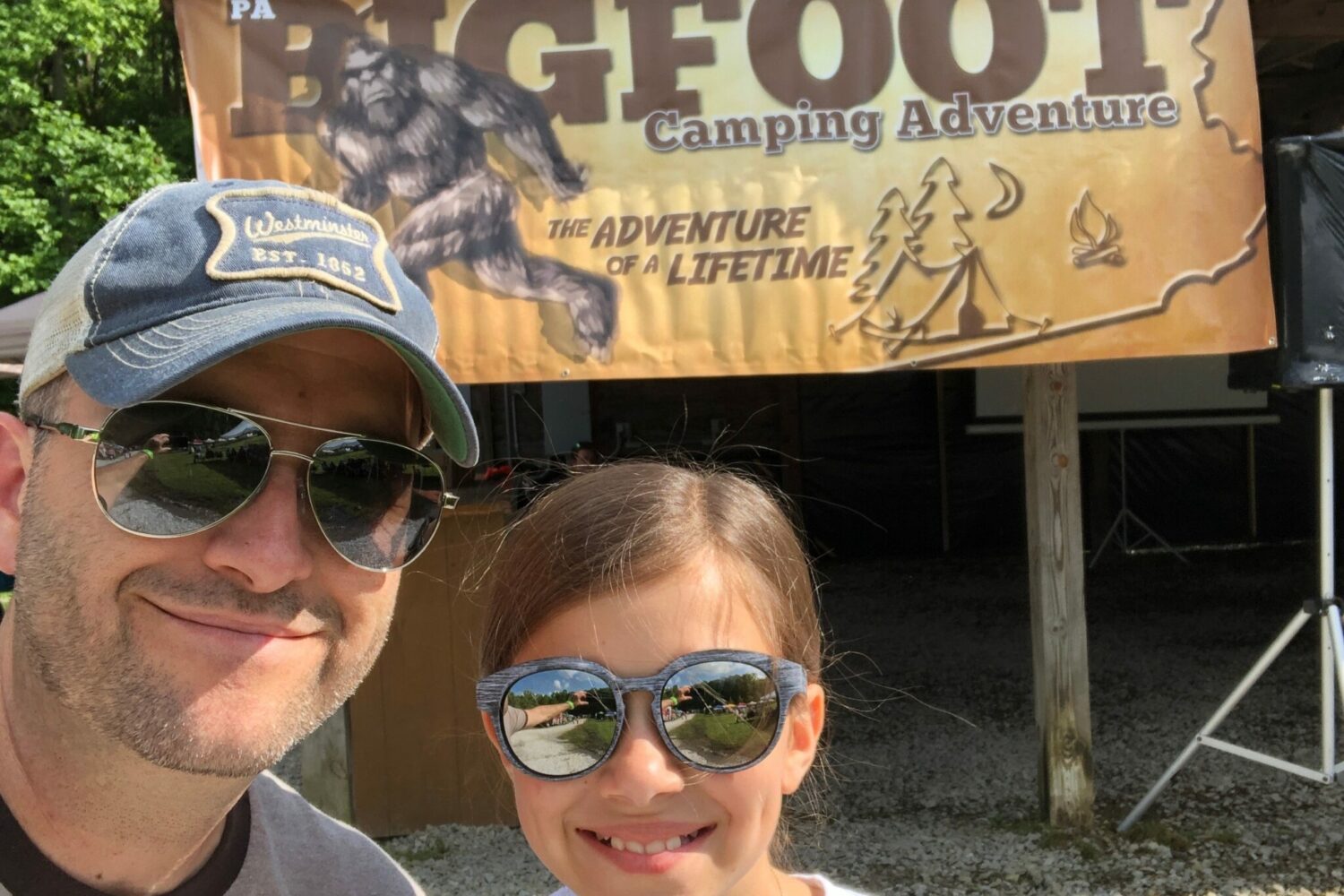 It was Saturday afternoon and the second day of the annual Pennsylvania Bigfoot Camping Adventure at Benner’s Meadow Run Camping and Cabins in Farmington, Pa. For a full day, my daughter and I had been camping out and enjoying the various speakers and vendors, all centered around the legendary hairy man of the woods.

Not that I believe in such a thing, of course.

After listening to author and paranormal investigator Stan Gordon give a talk on his specific area of expertise — Bigfoot and high strangeness (i.e., disappearing Bigfoots, transparent Bigfoots, Bigfoots and UFOs, etc.) — Boogieface and I decided to head back to our camp to spend the rest of the day lazily sitting around the fire.

At least that was the plan. But before I could crack a beer, Boogs asked if we could go throw a little frisbee down in the playground. Darn kids—always choosing physical activity over lovely, blissful sloth.

As we were tossing the disc around, an SUV pulled up and two men got out: Mark, who I’d chatted with briefly the day before, and his friend and fellow Bigfoot enthusiast, Chris. They immediately walked over and struck up a conversation as if we were old chums, which at first I thought was a little strange, considering we’d just met. But that’s only because I’m a terrible person.

Anyway, Mark started telling me how they’d just gone out to do a little scouting around the area and had found some primo “Bigfoot spots,” further out along the Chestnut Ridge, where they’d heard some mysterious whoops. Then Chris walked over to the SUV and came back holding a small plaster cast of a humanlike footprint, which they’d thought might be that of a juvenile Sasquatch (aka, a “Littlefoot”). Before heading off, they pointed out their camp and told us they’d be hanging out if we wanted to stop by later, which I thought was a nice gesture.

Either that or they were just a couple of campsite serial murderers, slowly reeling in their next victims.

Flash-forward a half hour or so…my daughter and I are back at our camp, and I’m finally about to crack that ice-cold beer I’d been thinking about. That’s when Boogieface, of course, asks me if we can go out looking for some Bigfoot footprints, too. Honestly, I was looking forward to doing absolutely nothing the rest of the night. But of course I caved. How can you possibly say no when your daughter asks you to go Squatching?

Again, not that Sasquatches, aka, Bigfoots, are real or anything.

So we headed up the hill to the dead-end at the back of the campground and started poking around in a muddy patch of ground right smack in the middle of a large fire break that cut through the property. While I was checking out some deer and, what appeared to be, raccoon tracks (like I would know), Boogieface excitedly called me over to see what she thought might be a Bigfoot print. At first I was skeptical. But I have to admit, I was surprised at how much it resembled an extremely large, humanlike foot. I could even see what appeared to be toe marks. Whatever it was, it was filled with murky water and lacked enough detail to come to any solid conclusions either way. So we pressed on.

A few minutes later, Boogs again called out to me, this time near a large mulch pile that sat over by the edge of the woods. “I think I found another one!” she said. Again, I wasn’t too optimistic (as is my way). But when I got over to her and looked down, I was again surprised to see yet another large, foot-shaped print, deeply impressed into the mulch. Now, I’ll admit, my experience analyzing possible Bigfoot prints is somewhat limited (basically, I’ve watched other people do it on television). So I decided to take a picture of it and text it to Mark to get his and Chris’s more qualified opinion.

After 10 minutes or so with no response, Boogs was begging me to call Mark to see if he’d come over and cast it for her. I, of course, was still dreaming of a lazy evening by the campfire. So I tried to explain to her that if Mark had thought it was anything significant, he certainly would’ve texted us back by now. But my daughter was persistent, and she begged me to walk over to their camp and ask them in person.

Again we headed off across the campground and made our way to Mark and Chris’s camp. Apparently Mark had been charging his cell phone and hadn’t seen my message. But when I showed both he and Chris the photo, they were visibly…ahem…impressed and said they wanted to go and cast it. Which, as I’m sure you can imagine, made Boogieface’s day.

Minutes later, the four of us, along with Chris’s brother Angelo, were all back over at the site of the print preparing to do a plaster cast. Closely examining the track, Mark pointed out what appeared to be a large big toe, as well as three more, two-inch-deep toe impressions, which had actually pushed up the mulch in the front of it. He and Chris then measured the print and found it to be 17 inches long, 7 inches wide at the toes, and 5 inches wide at the heel. Unless Shaquille O’Neal had recently been strolling through the campground, it was starting to look as if we might actually have something!

That is, if you believe in that sorta thing.

As Mark began to pour the liquid plaster into the print, I couldn’t believe what was happening. Here I was in the middle of the Laurel Highlands, in pitch dark, casting what could be an actual Bigfoot print—one that my own daughter had discovered! It was surreal. I looked down at Boogieface as she held the flashlight on the print, and she was grinning from ear to ear.

Once the cast was poured, Boogs and I went back to camp where we visited with our camp neighbor Amy and her crew, while the plaster hardened. Two hours later, we all went back up to the site of the print, and Mark dug out the cast with a small shovel. I then very carefully carried it back to our campsite, where my daughter proudly shared it with our new friends.

All keyed up from the evening’s events, I had a few beers to calm my nerves and didn’t get to bed until sometime after 1 a.m. Thankfully, an earth-shaking boom of thunder woke me up just a little over four hours later. Oh joy. Not wanting to be out under a bunch of trees during a crazy thunderstorm, we quickly tore down our camp and headed off to a charming cafe called Fuel Coffee Works, where we took in some much needed caffeine and relived the previous night’s excitement.

After the storms blew through, we headed back to the campground where we were able to show the cast to Cliff Barackman (“Finding Bigfoot”) and Dr. Jeffery Meldrum (Professor of Anatomy and Anthropology at Idaho State University)—probably the two foremost authorities on so-called Bigfoot casts. We also took Stan Gordon and a couple of intrigued event staff members up to see where Boogs had discovered the print. They immediately started poking around the general area and were able to find three other possible prints, one of which looked eerily similar in size and shape to the one we had cast, which, as my daughter gleefully pointed out to me, only added to the credibility of our find.

We left that day emotionally spent and with a lot of questions: Was it really a Bigfoot footprint? Do Bigfoots even exist at all? Shouldn’t it actually be “Bigfeet”? Eh, who cares?

The point is I got to have an amazing, once-in-a-lifetime experience with my pre-teen daughter, who, by the way, has already told me that she wants to come back and go Bigfooting again next year.

Just for fun, of course. I mean, who really believes in Bigfoot anyway?